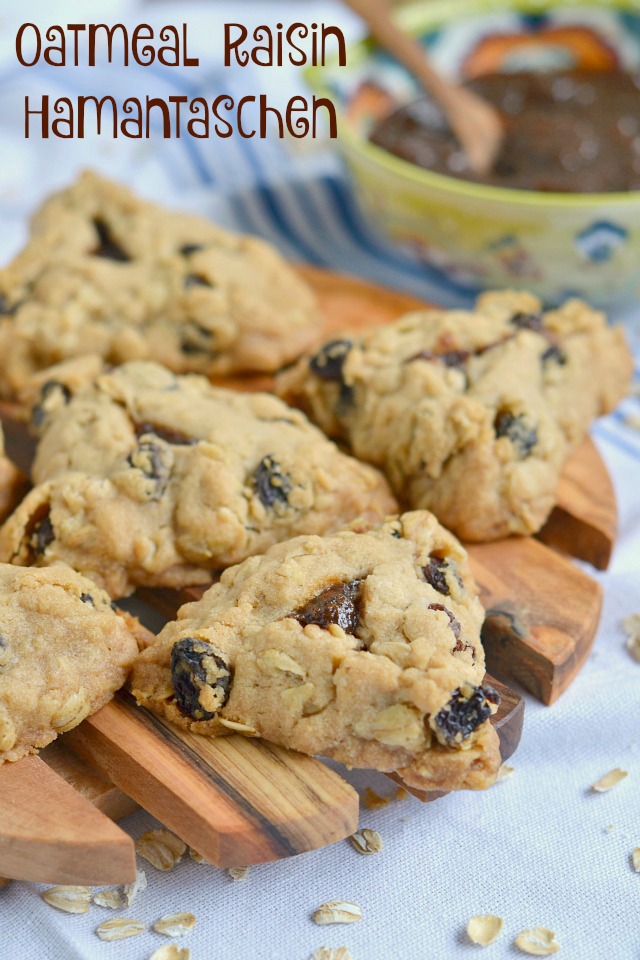 Hamantaschen season is officially here and I am bouncing off the walls! All through the year, I write down new hamantaschen flavors that come to me in my dreams, during conversations with my pastry chef sister and ideas that come from my amazing readers. And then comes the hard part of choosing which ones to actually make. At the top of my list this year were these oatmeal raisin hamantaschen. What could be wrong with a chewy oatmeal raisin cookie in the shape of a hamantaschen with an amazing brown sugar raisin filling??? The challenge with oatmeal raisin cookies is that they usually spread while they bake so I came up with a great new recipe to give you the chewy cookie you know so well and the triangle shape you expect from a hamantaschen. 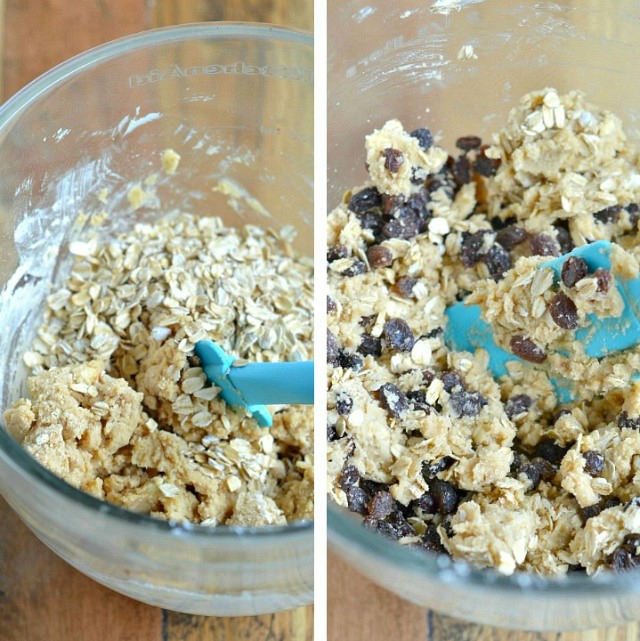 I love how easy this dough is to make. Hardly any mixing and it rolls out so beautifully! 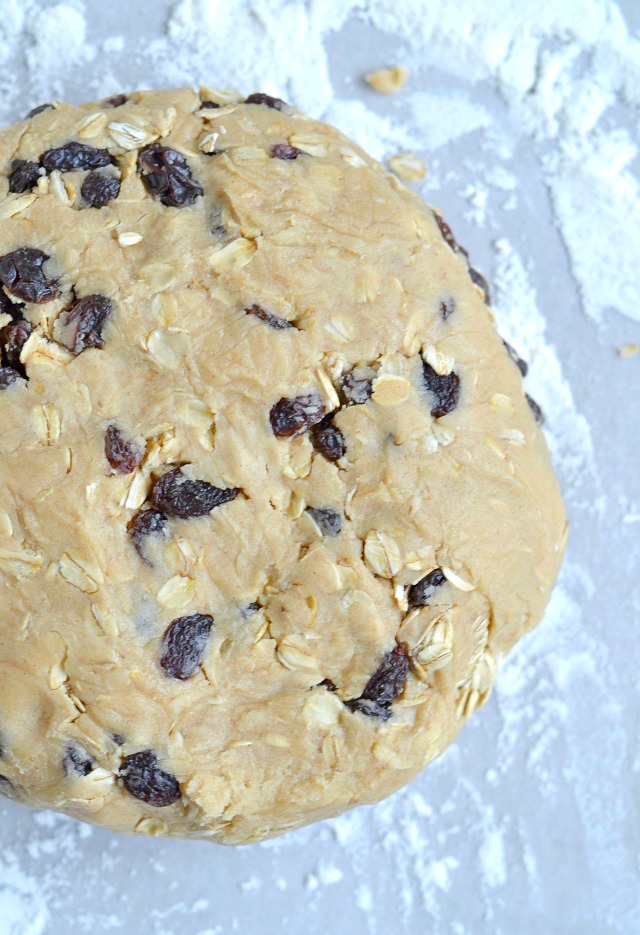 Just look at that! The raisins definitely get in the way while you are cutting the circles for the hamantaschen but you can just push them right back into the dough while folding. 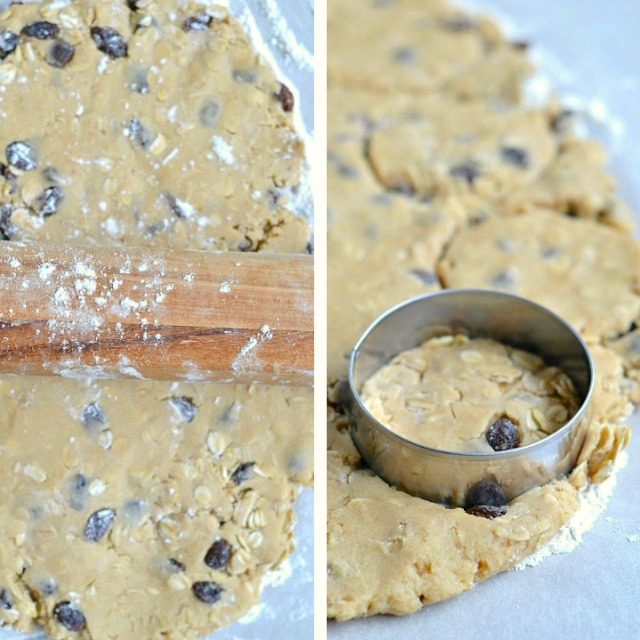 Did I mention that amazing filling? Soak the raisins to get them nice and plump then blend with brown sugar, molasses (or date syrup), lemon juice and cinnamon. Heaven! 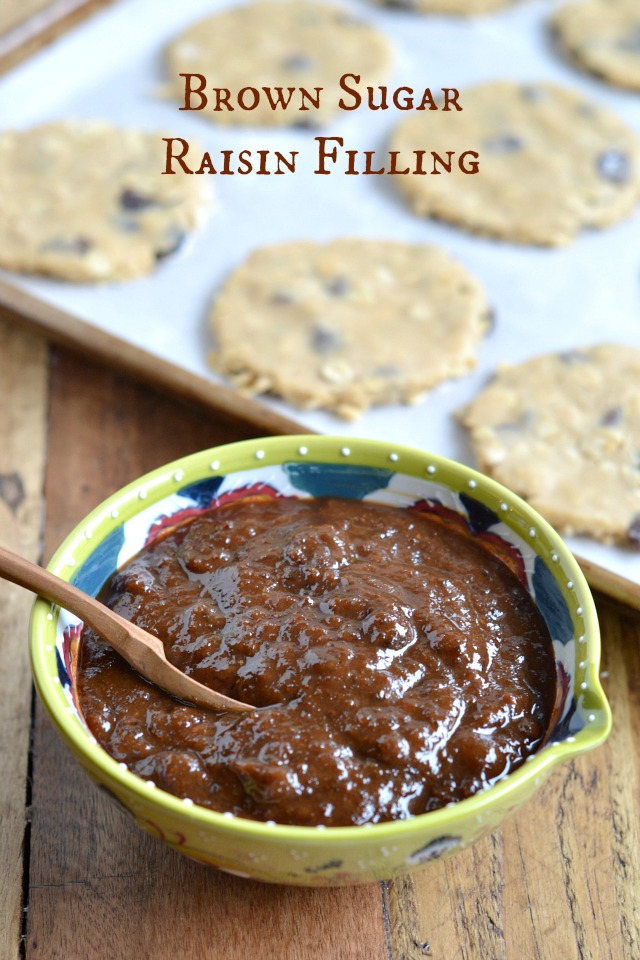 The dough is so supple and easy to fold. Just don’t put in too much filling! That rule applies to all hamantaschen, by the way. If you overfill, they probably won’t stay closed and pretty. 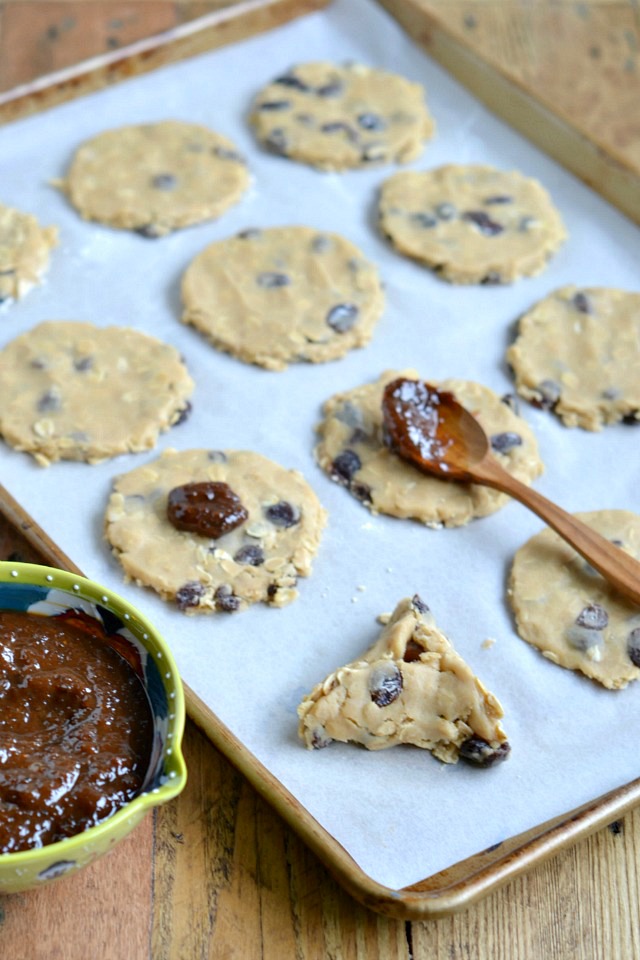 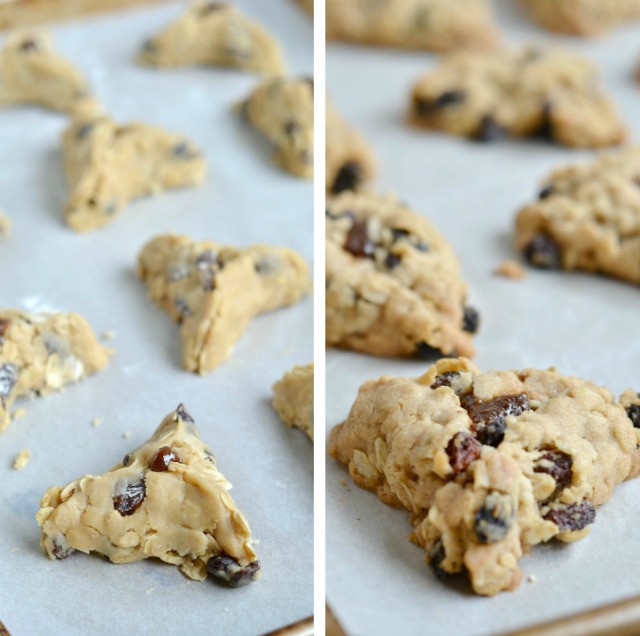 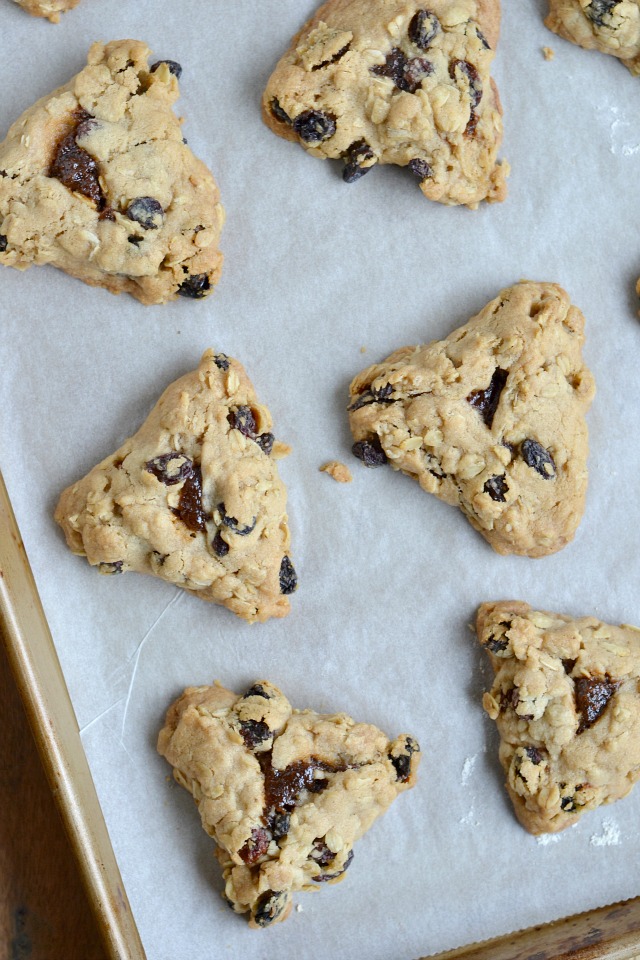 In a stand mixer with the paddle attachment, beat the vegan butter, brown sugar and salt on low until just combined but not completely smooth. You should still see bits of brown sugar in the mixture.

In a separate mixing bowl, combine the flour, cinnamon and baking soda. With the mixer on low, slowly add the flour mixture to the butter mixture until just combined. The dough should be slightly crumbly.

Fold the oats and raisins into the dough. Form the dough into a disc, wrap in plastic wrap and refrigerate for 30 minutes. This dough can be refrigerated for up to 3 days and frozen for up to 3 months.

Pour the boiling water over the raisins and set aside for 15 minutes. Drain the water from the raisins then place the raisins, brown sugar, molasses, lemon juice and cinnamon in a food processor. Blend until thick. Refrigerate the filling for up to 5 days or freeze for up to 3 months.

Remove the dough from the fridge, unwrap and place on a lightly floured surface. Using a rolling pin dusted with flour, roll out the dough to 1/4 inch thick. Cut out rounds of dough using a 3-4 inch cookie cutter, being mindful that the raisins can get in the way of the cookie cutter, and carefully transfer the dough rounds to the parchment lined baking sheets. Spoon 1/2 teaspoon of the raisin filling in the center of each dough round then fold up the edges to create a triangle. Pinch the edges together so the filling doesn't leak out while they bake. Each cookie should be 1 inch apart because they will grow while they bake.

Bake the hamantaschen for 20-25 minutes, until the cookies are beginning to brown around the edges. Transfer to a cooling rack to cool completely.

This is a post for the type 1 diabetics out there!

Next up in summer adventures with the Strauss’s

Anyone else feed alpacas today?? . My sister and I

Are you making an effort to speak less lashon hora

Since my kids are not in camp this summer, I want