All the flavors of a burrito in one bite! You’ve got potatoes, refried beans, corn, jalapeños, cheddar, sour cream, salsa, guacamole, and lime. These latkes would be so fun served like a taco bar, with all the toppings on the side so everyone can top them however they want but I’m in for ALL the toppings! 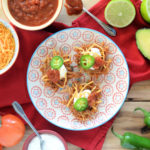 Peel the potatoes and place in a bowl of cold water until ready to shred. The water will keep the potatoes from browning.
In a mixing bowl, whisk the eggs then add the taco seasoning and refried beans to combine.
Shred the potatoes and onion by hand or in a food processor. Transfer to a kitchen towel or cheese cloth and squeeze as much liquid as you can out of the potatoes. Stir the potatoes into the refried bean mixture. Fold in the corn, jalapeños and cheddar.
In a saucepan over medium-high heat, pour in about 1/4 inch of oil. Once the oil is hot (a drop of the batter placed in the pan should sizzle), carefully drop the latke batter into the oil using a cookie scoop or 1/4-size measuring cup, cooking in batches of 3-4 latkes.
When the edges of the latkes are brown and crispy, around 3-4 minutes, flip using a spatula or two forks. Cook until the second side is browned. Transfer the latkes to a paper towel-lined plate to drain and sprinkle with salt while still warm. Repeat with the remaining batter.